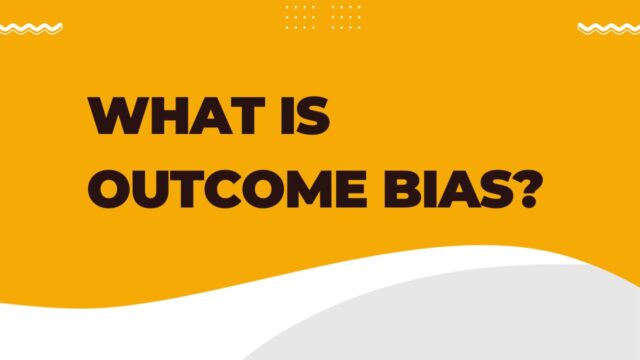 We may also overestimate our own skill in making decisions, leading us to take unnecessary risks. Outcome bias is often exacerbated by hindsight bias, which is the tendency to believe that we could have foreseen the outcome of a decision, even if we could not have reasonably done so at the time. By understanding outcome bias and its impact on our decisions, we can guard against it and make better choices.

The different types of outcome bias

Finally, there is self-serving bias, which is when we attribute our success to our own skills and abilities, and our failures to external factors beyond our control. Outcome bias can be a powerful influence on our behavior, but if we are aware of it, we can try to avoid it.

How to overcome the effects of outcome bias

To overcome the effects of outcome bias, it is important to focus on the process of decision-making, rather than the result. For example, let’s say you are trying to decide whether to invest in Company A or Company B. Instead of simply looking at whether the companies have made a profit in the past, you should consider factors such as their financial stability, management structure, and long-term goals. By taking a holistic view of the situation, you can make a more informed decision that is less likely to be influenced by outcome bias.

Examples of how outcome bias has played out in history

Outcome bias is the tendency to judge a decision by its results rather than by how rational it was when made. This bias can lead people to incorrectly assess both past and future choices. For example, individuals might attribute their success to skill rather than to luck, or they might blame themselves for a bad outcome that was out of their control.

Fortunately, awareness of outcome bias can help us to avoid its effects. For example, we can try to judge past choices based on the available information at the time, rather than on hindsight. We can also try to be aware of our own emotional reactions to outcomes, and remind ourselves that these reactions do not always reflect reality. By acknowledging the role of outcome bias in our thinking, we can help to reduce its impact on our lives.

The potential consequences of succumbing to outcome bias

While outcome bias can sometimes lead to inaccurate judgement, it can also have more serious consequences. For example, it can lead to overconfidence and excessive risk-taking. If you always think that your decisions are going to work out well, you may be more likely to take unnecessary risks. Outcome bias can also lead to blame and finger-pointing. If something goes wrong, people are quick to point fingers and assign blame. The reality is that every decision carries some risk of failure; it’s impossible to predict the future with 100% accuracy. But when we succumb to outcome bias, we tend to forget this fact and hold people responsible for bad outcomes even when they made reasonable decisions.

How to avoid letting outcome bias influence your decisions

To avoid letting outcome bias influence your decisions, it is important to think about the long-term consequences of your actions. For example, if you are considering buying a stock, you should ask yourself whether it is a good investment, regardless of how it has performed in the past. Similarly, if you are considering whether to start a new business, you should think about the potential for long-term success, rather than focusing on short-term outcomes. By thinking about the long term, you can avoid letting outcome bias cloud your judgment and lead you astray.