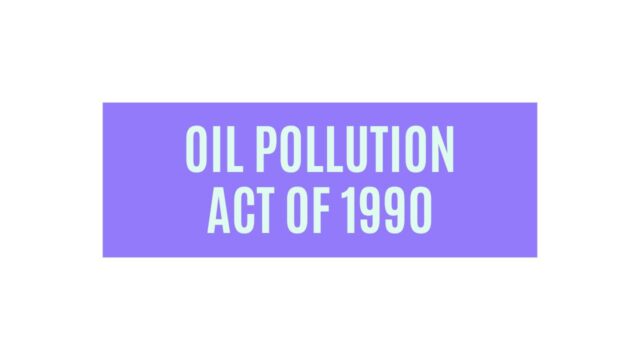 The Oil Pollution Act of 1990 was passed by the 101st United States Congress and signed by President George H. W. Bush. It works to avoid oil spills from vessels and facilities by enforcing removal of spilled oil and assigning liability for the cost of cleanup and damage, requires specific operating procedures; defines responsible parties and financial liability; implements processes for measuring damages; specifies damages for which violators are liable; and establishes a fund for damages, cleanup, and removal costs. This statute has resulted in instrumental changes in the oil production, transportation, and distribution industries.

A law that caps civil liability for oil spills caused by tankers and drilling vessels in the United States’ territorial waters. The passage of the law was prompted by the Exxon Valdez oil spill in 1989, where Exxon was held liable for billions in civil damages. The bill enjoyed popular support at its passage.

The Oil Pollution Act of 1990 caps BP’s civil liability for the Deepwater Horizon spill at $75 million. The law forces companies to have a “place to prevent spills that may occur”. The House passed the bill with a vote of 375-5, and it was passed in the Senate by a voice vote.

The oil spill disaster in Exxon Valdez highlights the potential of voluntary regulation as an oil spill prevention tool. During the years 1990-1995, the Oil Pollution Act was not fully operational, but voluntary initiatives aimed at reducing the risk of oil spills were largely responsible for the decline in oil spills in U.S. waters. Those voluntary measures included increased company awareness of their liability, more frequent audits and inspections, and voluntary replacement of older vessels with double hulls. They also improved staff training and changed vessel routing.

The Oil Pollution Act of 1990 requires pipeline operators to form a citizens’ advisory council to oversee the operation of oil terminals in the United States. While the contract for the Alyeska Pipeline Service Co. predates the legislation, many people involved in its establishment actively advocated for the inclusion of these provisions in federal law. In Alaska, the act mandates the creation of two demonstration projects to foster local citizen oversight of oil terminal compliance and partnership.

The Bureau of Ocean Energy Management recently approved a rule to increase the liability cap for offshore oil spills. This change is in line with the recommendations of the National Commission on the BP Deepwater Horizon Oil Spill and other studies. This new cap will be the highest liability cap allowed under the Oil Pollution Act of 1990. However, the increase is still far below the actual cost of the damages caused by the spill.

The removal of the liability cap on economic damages will only affect a fraction of oil production, and it will increase the cost of drilling in some regions. This could result in lower production in general. But the job losses will be concentrated at sites with high spill risk, which are only profitable because of the liability cap. In addition, the legislation does not increase the price of gasoline. It will have little effect on the price of gasoline.

The Oil Pollution Act of 1990 was passed to protect the environment from the effects of oil spills. It is part of the federal Clean Water Act and makes it illegal to dump oil into U.S. navigable waters in the exclusive economic zone. Oil spills are also prohibited under the act, and the “person in charge” of a vessel must report any spill immediately. Failing to report an oil spill can result in felony charges. Individuals and corporations that fail to comply with the act can be fined up to $200,000 per incident, and even be jailed up to five years.

The DOJ may pursue criminal prosecution if there is evidence that a Responsible Party was responsible for the pollution. This includes any officer, crew, owner, or manager. Even a responsible party can be prosecuted under the law if it was recklessly operating or knowingly discharging oil in a prohibited area. This type of prosecution can result in fines of up to $1 million and imprisonment for up to 15 years.