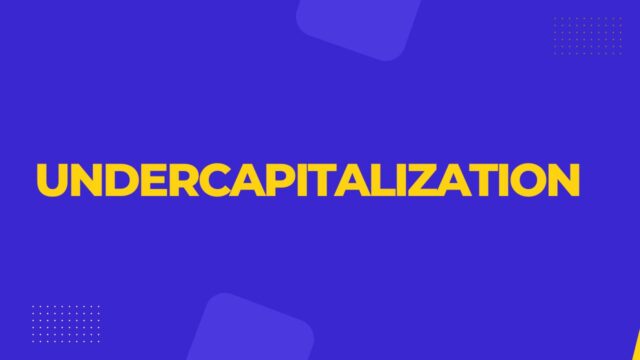 Why Is Undercapitalization a Problem? And How You Can Fix It

Undercapitalization is an index of effective and proper utilization of funds

Undercapitalization can lead to a variety of business problems, including the inability to generate sufficient cash flows or insufficient cash reserves. A company may have too low a capital base during a recession or underestimate the value of its future earnings. This can negatively affect consumer sentiment and cause employees to demand higher wages. If a company does not have enough funds, it may eventually close its doors, face a steep decline in profits, or even go bankrupt. Properly implementing policies and processes can alleviate the problem.

Negative cash flow is caused when a business spends more money than it generates. This can happen in a number of ways, from an undercapitalization to a cyclical challenge. Some examples of such challenges include a new competitor entering the market to a sudden regulatory change. But regardless of the reason, it’s important to recognize that negative cash flow is inevitable and that there are several steps a business can take to avoid it.

Undercapitalization can result in a business not growing or expanding, limiting its potential. When a business lacks sufficient cash, it cannot make purchases or invest in new projects, which may lead to a decrease in sales. This also prevents the company from securing future loans. Banks generally prefer working with companies that have sufficient capital because they want to make sure they can repay the money they lend.

It can lead to bankruptcy

Undercapitalization occurs when a business does not have enough capital to conduct normal business activities. As a result, it cannot pay its creditors, generate sufficient cash flow, or access other forms of financing. Undercapitalization increases a company’s risk of bankruptcy because the business is not able to service its debts. Additionally, firms that are undercapitalized are more likely to choose sources of credit that cost the company more than they can afford.

Undercapitalization also happens when the promoters of the company issue a smaller number of shares to their own shareholders than the required amount of capital. This can cause a business to fall into trouble when a sudden emergency arises that requires extra cash flow. This can lead to the company’s downfall. In addition, the company may end up paying more taxes than it would have otherwise. Undercapitalization can also cause the company to raise additional funds at higher interest rates.

It encourages entrepreneurs to set up new ventures

Under-capitalization of new ventures is beneficial for developing countries. Developing countries like India, Pakistan, and China experience lower growth rates, and many people find themselves unemployed. This situation is exacerbated by the lack of capital. The World Bank has implemented several programs to support new businesses. These include the Opportunity Funding Corporation’s Venture Challenge and Moot Corp Competition. These competitions encourage entrepreneurs to compete for available resources.

Under-capitalization is not a serious economic problem for the society, and is actually beneficial for the economy. It encourages new ventures and helps existing ventures expand, increasing industrial production. The resulting increased number of firms increases the availability of a wider range of products and services for consumers. It also reduces the unemployment rate, since more firms are established. In this way, under-capitalization is beneficial to both stockholders and entrepreneurs.