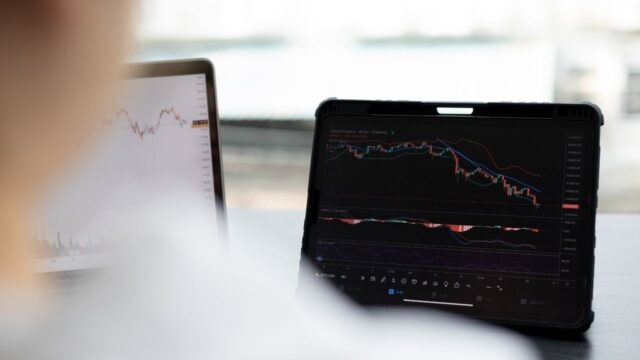 Spotting the triple top pattern, traders will look for a chart with three successive peaks, with each peak being lower than the one before it. The pattern is considered complete when the price breaks below support, which is typically the level of the lowest of the three peaks. Once confirmed, traders will typically enter into short positions, expecting the market to continue moving lower. stop-loss orders may also be placed just above resistance.

What are some of the characteristics of the Triple Top Pattern

The key characteristics of the triple top pattern are:

(3) A test of resistance followed by a lower high. The triple top is a bearish reversal pattern that signals the end of an uptrend and the beginning of a downtrend. Sellers step in after the third peak and push prices lower. The ideal target for the triple top pattern is the support level that was created by the lows between each peak.

How does the Triple Top Pattern form and what happens next

The pattern is created by three successive peaks followed by a breakout below support. This selling pressure signals that the bulls are losing control and that the bears are ready to take over. The pattern is confirmed when prices break below the neckline, which is formed by connecting the lows of the three peaks. The measured move target for the Triple Top Pattern is calculated by taking the height of the pattern and projecting it downward from the point of breakout. This provides traders with an important level to watch for downside momentum. When the Triple Top Pattern forms, it is typically an indication that the bulls are exhausted and that a more significant sell-off is likely to occur.

There are a few different strategies that can be used when trading with the triple top pattern. One popular strategy is to sell when prices break below support. Another strategy is to wait for prices to retest the resistance levels and then sell when prices fail to break through resistance. Whichever strategy you choose, it is important to place stop-loss orders above the highs to protect your capital in case prices reverse and start moving higher again.

The key risks involved with trading this pattern are false breakouts and whipsaws. A false breakout occurs when prices move below support but then quickly reverse and head back higher. This can often lead to traders chasing the market and getting caught in a losing position. A whipsaw is another type of false breakout where prices make a small move in one direction before quickly moving back in the opposite direction. This can also lead to losses if traders are not careful.

Another risk to be aware of is that the Triple Top pattern is not as reliable as some other reversal patterns. This means that there is a greater chance that the pattern will not result in a reversal and prices will continue moving higher.

Overall, the Triple Top pattern can be a useful tool for identifying reversals in an up trending market, but it’s important to be aware of the risks involved before trading it.

When it comes to trading, there is always risk involved. However, that doesn’t mean that you can’t take steps to manage that risk and improve your chances of success. One way to do this is by being aware of patterns that can form in the market. The Triple Top Pattern is one such pattern that can be a helpful indicator of future market movement.

The Triple Top Pattern forms when there are three consecutive peak prices followed by a pullback. This pattern can be a helpful indication that the market may be about to reverse direction. When you see this pattern forming, it’s important to take a close look at your trade setup and make sure you have your stop loss in place. By doing so, you can protect yourself from potential losses if the market does indeed turn around.

Of course, no one can predict the future with 100% accuracy. However, by being aware of the Triple Top Pattern and taking steps to manage your risk, you can improve your chances of success in the markets.

Some of the things you need to be aware of before trading with the triple top pattern include:

-The triple top pattern typically forms after a sustained uptrend, so it’s important to recognize when the uptrend is coming to an end.

-The three peaks should be fairly close together in terms of price, with each peak followed by a significant drop in price.

-The triple top pattern is confirmed when the price breaks below the support level created by the three peaks. This break is typically accompanied by high volume.

When trading with the triple top pattern, it’s important to wait for confirmation before entering into a short position. Once the pattern is confirmed, you can look for bearish patterns such as head and shoulders or downtrend lines to help you plan your entry and exit points. As with any trading strategy, it’s also important to use stop-loss orders to limit your losses if the trade doesn’t go as planned.