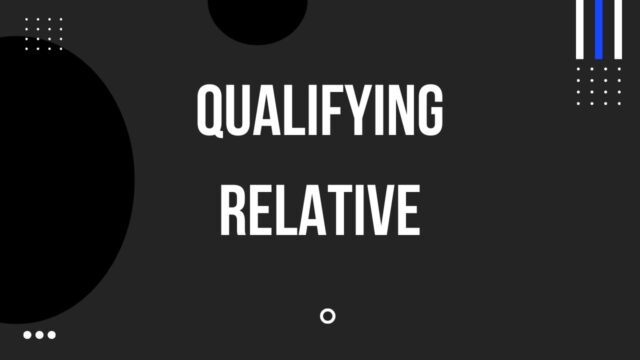 What is ‘Qualifying Relative’

A federal income tax designation that allows a taxpayer to claim as a dependent someone for whom he or she provided considerable financial support during the tax year. Claiming a qualifying relative as a dependent will allow the taxpayer to take an additional exemption, which will reduce his taxable income, dollar for dollar.

The IRS requires four tests to be passed for a person to be classified as a qualifying relative. They must not be a qualifying child; they must live in the taxpayer’s household (but certain types of relatives, including children, siblings, parents, grandparents, nieces, nephews, aunts, uncles, certain in-laws and certain step-relatives are not required to live in the household); must have had a gross income of less than $3,650 (in 2009), and must have received more than half of their financial support for the year from the taxpayer. A qualifying relative can be any age. IRS Publication 501 provides details about meeting the qualifying relative tests.

Finally, claiming a dependent can also help you to qualify for other benefits, such as the child and dependent care credit. As you can see, there are numerous advantages to claiming a qualifying relative as a dependent on your taxes. Before doing so, however, it is important to make sure that you meet all of the qualifying criteria. Otherwise, you may end up paying penalties or incurring other penalties.

• Is the person related to you in one of the following ways: as a child, stepchild, foster child, sibling, half-sibling, or grandchild?

• Does the person live with you for more than half the year?

If you can answer “yes” to all of these questions, then you can claim the person as a qualifying relative on your tax return. including her on your return can help you maximize your tax deductions and lower your overall tax bill.

Most people know that they can claim a dependent on their taxes- but what happens if you don’t? Generally, if you are eligible to claim someone as a dependent, you should. There are a few reasons for this. First, claiming a dependent can help to lower your taxable income. This can save you money come tax season. Additionally, claiming a dependent can also help you to qualify for certain tax credits and deductions. For example, the earned income tax credit is only available to taxpayers who have qualifying dependents.

Finally, claiming a dependent can also help to ensure that you receive any government benefits that you are entitled to. If you are receiving government assistance, failing to claim a dependent could result in a reduction or termination of those benefits. In short, there are many good reasons to claim your qualifying dependent on your taxes. So if you are eligible to do so, be sure to take advantage of it.

Tips for claiming a qualifying relative as a dependent

When it comes to taxes, claiming a dependent can provide a significant financial benefit. In order to claim a dependent, the taxpayer must meet certain criteria set forth by the IRS. First, the dependent must be related to the taxpayer in one of the following ways: child, stepchild, foster child, adopted child, sibling, stepsibling, half-sibling, or descendant of any of these relatives.

Second, the dependent must have lived with the taxpayer for at least half of the tax year.

Third, the dependent must not have provided more than half of their own support during the tax year.

Fourth, the dependent must not have filed a joint return with their spouse during the tax year. If the taxpayer meets all of these criteria, they can claim their qualifying relative as a dependent on their taxes. Doing so can help to reduce their taxable income and lower their overall tax liability.