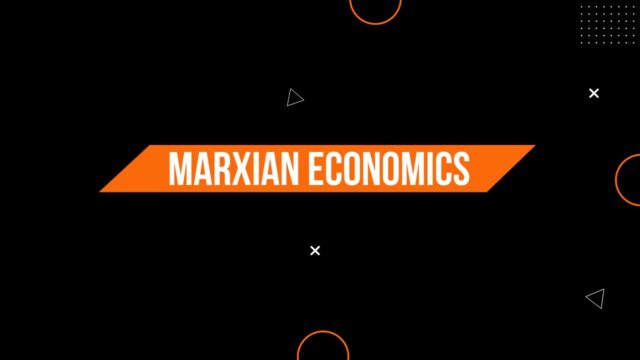 There is no doubt that Marx’s political philosophy, along with the modes of production and labor theory of value, have profound impact on the world economy and its history. In this article, we discuss Marx’s modes of production and labor theory, and the composition of capital. We also critique the Bohm-Bawerk challenge to Marx’s economic theory. However, most economists do not accept the principles of Marxian economics.

Originally, Marx was an early follower of Hegel and he sought to incorporate material processes of making a living into his historical analysis. He also criticized Hegel’s older followers for elevating ideologic categories above the material processes. In contrast, he rejected the intellectual rebellion of contemporary Hegelians for contesting the categories and material processes underpinning the system. In a dialectical way, Marx framed the issues that would ultimately decide the direction of human history.

The first and most essential distinction between the two is the difference between the nature of the mode of production and its role in social relations. Although Marx’s modes of production focus on economic and social relations, they are often blurred by moral principles. Moreover, all societies that exalt market principles also are heavily enmeshed with hierarchy. Historically, markets were produced by militarized empires driven by the accumulation of metals, slaves, and soldiers. While the process was initially beneficial, it also destroyed social bonds and led to the emergence of in-equality. As debts grow, lenders are free to engage in usury and take advantage of serfs as collateral.

His labor theory of value

Marxian economics and his labor theory are closely related concepts, but they have contrasting ideological underpinnings. In the past, Adam Smith, who wrote an essay in 1729, argued that the value of articles is measured by the amount of time it takes to produce them, rather than the actual amount of value. The value of money, by contrast, was increased by its extra value, as it facilitates exchanges.

While bourgeois economists and sociologists have challenged Marx’s dialectical method, his economics is still the most compelling way to understand capitalism today. Despite his criticism of profit-seeking, Marx’s labor theory of value remains an important part of Marx’s overall critique of capitalism. Here’s a closer look at this theory. We’ll see how Marx’s ideas have endured throughout history.

His analysis of the composition of capital

In the 1830s, the Kondratiev waves of capitalist development were largely favourable to Marx’s theory of the composition of capital. However, these secular trends rarely show an increase in the wage component of total capital outlays. Therefore, it is important to distinguish between physical and value capital in Marxian economics. It is possible to combine both types of capital in a Marxian economics analysis.

The composition of capital can be understood as the ratio of constant and changing elements. Marx identified two categories of capital – the monetary value of a production plant and the variable capital that is the monetary value of wages. The organic composition of capital does not apply to all capital assets; it does not include the’sphere of consumption’. Instead, it describes the relationship between the different types of capital and the relative value of each component.

His critique of the Bohm-Bawerk challenge

The Bohm-Bawerk challenge to Marxian economics began in 1884. Bohm-Bawerk, a German economist, wrote a history of interest theories. Bohm argued that capital is a circular process and that the more we invest in something, the more we produce. This “roundabout” process is more efficient than direct, simple production, and interest is justified by time.

His views on money

According to Marxian economics, money is a commodity that serves multiple functions and is not a mere medium of exchange. Marx discusses the social and economic functions of money and considers its multiple perspectives. This article will focus on the functions of money in Marx’s economic system. Let’s start with the definition of money. Marx defined it as a’measure of value’ and ‘a unit of account’.

According to Marx, money is a materialization of abstract labor. Money is the product of economic relations, which are the basis of the market. In his view, precious metals are no longer used as money. Paper money and electronic money are stamped with the liabilities of the currency issuer. These forms of money are confirmed by law and supported by government credit. By contrast, cryptocurrencies such as Bitcoin and Ethereum are merely technological products that do not have any economic relationship.

His analysis of inter-industry data

The debate over data sharing is not new. Industry data are based on statistical classification. The output of an industry is not a single product, but rather the combined output of many subsidiaries and subsets of main products. While many of the issues associated with inter-industry data sharing are familiar, this study offers a new perspective on the issue. It argues that the data collected from companies and other organizations can provide valuable insights on the nature of competition and the optimal use of resources.