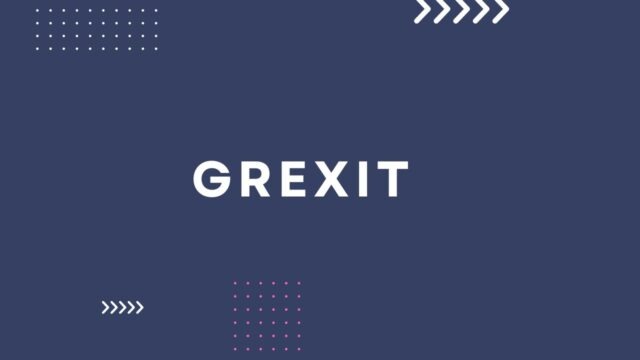 Grexit is a term that is used to describe the potential withdrawal of Greece from the European Union (EU). The term is a combination of the words “Greek” and “exit,” and it first gained prominence during the Greek debt crisis in 2015. At that time, there was concern that Greece might be forced to leave the Eurozone, which is the group of EU countries that use the euro as their official currency. While Greece ultimately did not leave the Eurozone, the term “Grexit” has continued to be used to refer to the possibility of Greece leaving the EU in the future. Given Greece’s ongoing economic difficulties, the possibility of Grexit remains a topic of discussion among economists and politicians.

The Effects of a Grexit on the World Economy, the Drachma, and the European Union

The world economy is in turmoil. As a result of Greece’s debt problems, it is threatening its continued membership in the European Union. What would a Grexit mean? And how would it affect the drachma? In this article, we will examine the effects of a Grexit on various aspects of the world economy, the drachma, and the European Union. Read on to learn about the most important effects of a Grexit on various sectors of the economy.

The root of Greece’s debt problems lies in the return to democracy, which has proven to be a mistake. The return to democracy also missed the opportunity to reform Greece’s political system. Previously, Greece was governed by two family-led parties, PASOK and ND. These parties were completely incapable of governing the country and managing its resources. The result was the resulting economic crisis. The Greek economy has been in a downward spiral ever since.

The emergence of a pandemic requires countries to deal with the short-term and long-term effects of the disease. Greece’s financial situation is expected to improve over time, but its high debt-to-GDP ratio will mean more relief is needed. This is reminiscent of the 1970s IMF bailout of New York City. But while the Greek government hopes for more debt relief to help it get back on track, the conditions that accompany the aid packages make them less attractive.

Impact of a Grexit on the world economy

A Grexit would have major ramifications for Greece’s economy and politics. The move would demonstrate to other troubled countries that it is possible to exit a monetary union. It would affect relations within the Eurozone, resulting in tighter integration or greater disharmony. It would have significant economic effects, especially in the aftermath of the Greek recession. Yet, the impact of a Grexit would be difficult to predict, even in theory.

The initial condition of Greece before the crisis was a different one from that of Asian countries. The initial condition of Greece, as compared to its Asian peers, was different from that of Asian countries before 1997. To illustrate this point, Krugman has plotted the Economic Complexity Index (ECI) against GDP per capital. This measure measures how sophisticated a country’s export basket is. In the left panel, Greece is compared to other countries of its class.

Impact of a Grexit on the Greek drachma

If Greece leaves the euro, it will be forced to redenominate its currency. This means that existing prices, wages, contracts, and balance sheets are going to change to drachmas. The impact on Greek business will be significant, but only if the drachma is devalued. If Greece leaves the euro, it will have to print enough new currency to cover its debt repayments, which will result in inflation. In the meantime, the value of the drachma will remain low compared to other currencies, which will lead to a significant increase in exports and tourism. In the end, foreign direct investment is expected to increase as Greece’s economy improves.

Grexit is one of the most important developments in today’s financial landscape. During the financial crisis, the Greek drachma has become a popular currency, and the country’s citizens have recently proposed that it leave the Eurozone and use its local drachma as its official currency. This move would help Greece avoid a future crisis and improve its economy.

Impact of a Grexit on the European Union

A Grexit would be a historic event, with profound implications for the Greek economy and politics. It would also demonstrate that a troubled country can leave a monetary union. It would also have profound effects on France, Spain, and Italy’s political systems. It would also alter the political landscape in the rest of the European Union, potentially causing tighter integration or more disharmony. While the impact on each of these countries is still unclear, there are a few key things that you should know about the possibility of a Grexit.

While the impact on the European Union would be huge, a Grexit is unlikely to happen unless Greece is willing to change its economic policies. It would also bring massive risks, including a severe recession. Furthermore, a Grexit would not be popular in Greece, as polls have consistently shown that the majority of Greeks are willing to make sacrifices in order to stay in the European Union. Indeed, the Syriza party campaigned on its commitment to remain in the EU.