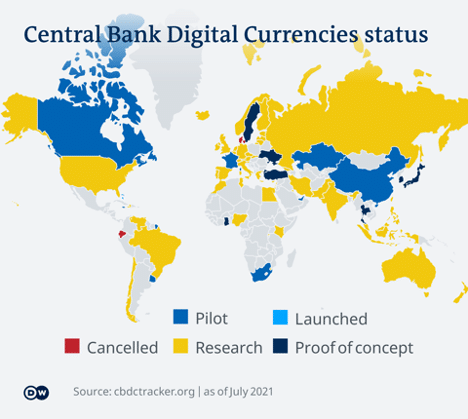 140 million people are now using digital wallets for China’s new digital yuan, and recent data shows that as much as $9.5 billion worth of transactions have already been made. While China is yet to officially release its bold new digital currency, the country is a trailblazer among a growing number of nations actively exploring the possibility of releasing their own form of digital finance.

Central banks around the world are looking into developing central bank digital currencies (CBDCs) in a bid to modernize their financial systems whilst competing with the wild growth of decentralized cryptocurrencies like bitcoin and improving payment infrastructures.

Interest in the development of CBDCs is rife all around the world. Although China’s efforts are among the most advanced globally with various pilot schemes already underway, there are plenty of other examples of nations taking on their own interpretations of how digital currencies should work.

Why is this global rush to embrace new modes of finance taking place now? And how are different countries tackling the notion of launching their own digital currencies? Let’s take a look at an emerging development that’s set to shape the future of world finance:

The Lure of Digital Currency

Of course, we must acknowledge that all countries looking to adopt digital currencies already have their own fiat versions of money. So why are so many governments looking to create virtual finance?

There can be a number of reasons why nations are exploring digital currencies – many of which can depend on the economic circumstances within respective countries. The International Monetary Fund notes that among the driving forces are the lower transaction costs of CBDCs in comparison to their more physical fiat counterparts, digital currencies can also promote greater levels of financial inclusivity among unbanked populations. As the chart above shows, financial inclusivity is an issue, particularly for nations in Africa, Asia and South America. Digital currencies have the potential to bring easier and safer access to phone-based financial management services for countless citizens.

CBDCs can also help to compete with private companies that need incentives to meet transparency standards and to mitigate illicit activity. Furthermore, they can help monetary policy to flow faster and in a frictionless manner.

Venezuela also introduced the world’s first state-backed cryptocurrency, the Petro in 2018 in a bid to tackle the rate of hyperinflation impacting the national currency, the Bolivar. The Petro had been developed as a stablecoin that’s linked to the value of Venezuela’s vast oil reserves. However, Petro has since been labelled a ‘scam’ by risk-rating websites like icoindex.com – although the coin has at least succeeded in bringing greater levels of cryptocurrency acceptance to the country.

How Digital Currencies can Change Finance Across Africa

One area that seems ripe for the arrival of digital currencies is Africa. As private cryptocurrency providers continue to grow across the continent, Africa’s appetite for crypto is exploding.

Many African countries are aiming to launch their own virtual money, which will be backed and issued by central banks. In fact, according to a Central Bank Digital Currency tracker from Atlantic Council, six African countries are among the 81 nations in the race to deliver a digital revolution in global finance.

Significantly, Nigeria has been identified as a leading nation in the exploration of CBDC adoption, with the possibility of an eNaira growing in recent months. In October, after three years spent in its development phase, Nigeria began piloting its digital currency in the hope that it can coexist alongside the Naira fiat unit of finance.

The necessity of digital currencies is particularly big in Africa. According to Nigeria’s central bank, the nation is prioritizing the development of a digital currency in a bid to improve the efficiency of foreign remittances into the country – which is the second-largest forex earner after oil domestically.

The emergence of CBDCs can work to complement emerging fintechs to leverage efficient borderless payments. Platforms like Connectum, which prioritizes multicurrency processing and artificial intelligence anti-fraud systems can work in tandem with digital currencies to minimize cross-border transaction fees attached to remittances while speeding up the process exponentially. Other solely crypto-based services like Alchemy Pay could also be incorporated into CBDC frameworks to improve efficiency in this area in the future.

Interestingly, not all nations intent on adopting digital currencies are looking to creating their own CBDC. In September 2021, El Salvador officially adopted bitcoin as legal tender in a move that caused many other countries to sit up and take note.

Why choose to adopt bitcoin? El Salvador’s President Nayib Bukele made the ambitious move in the hope of aiding the friction caused by the sending and receiving of foreign remittances, which accounts for as much as one-fifth of the country’s GDP. High transaction fees and the lack of a banking infrastructure makes this process difficult, but cryptocurrency and blockchain-based wallets have the potential to make the receipt of foreign money far easier.

Today, companies within the country are required to accept bitcoin payments by law and are welcome to swap their BTC for fiat currency once they receive payments. Significantly, in the wake of El Salvador’s bold move, a Panamanian congressman has proposed legislation that would see the country follow on in adopting a bitcoin-based digital financial system.

Although its adoption is certainly gradual, the movements of China, Nigeria and El Salvador mark the early stages of a financial revolution that’s set to sweep across the world. As the limitations of traditional finance are exposed, more countries are looking to CBDCs and existing cryptocurrencies like bitcoin as a means of bypassing long-term economic issues. While the success of transitioning to digital finance is yet to be measured, it seems clear that we’re on the precipice of a major financial revolution that could make money far more inclusive for all.