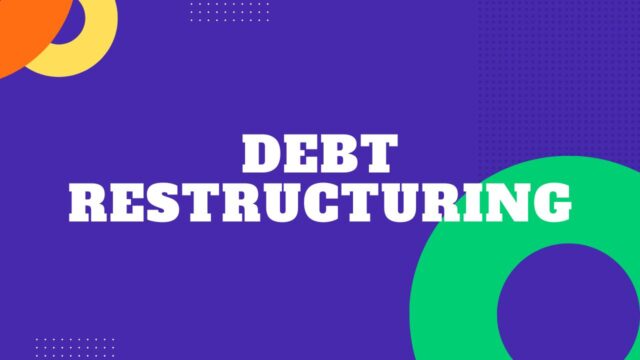 Debt restructuring is a process that changes the terms of your existing debt in order to reduce your monthly payments, interest rates, and duration of the loan. It is a valuable tool in the event of default, and borrowers should consider the costs before engaging in this process. Debt restructuring is an excellent way to restore liquidity and keep your business afloat. There are several common pitfalls to avoid, including the cost of filing for bankruptcy.

One of the most common pitfalls is the risk of a sovereign not paying all its creditors. The sovereign must start making payments on the warrants issued at the time of the restructuring. But if the sovereign is not able to make the payments, this can result in a looming legal battle. It is in the interest of all creditors to avoid this scenario, so lenders must address the risks before entering into any debt restructuring deal.

When companies enter into debt restructuring, they are looking for ways to convert their outstanding debt to equity. A restructuring process involves negotiating stake value with new investors and looking for alternative sources of capital. The advisors chosen to handle the process are crucial to the success of the process. A good financial advisor is essential for a successful outcome. The financial institution will act as a trusted advisor and will consider the business’s impending change in ownership.

A fair process of debt restructuring begins with a clear understanding of the goals of both the borrower and the creditor. Most debt restructuring is conducted on a voluntary basis between the two parties. If a creditor or borrower cannot agree to these goals, the court will appoint an administrator or mediator. In the case of bankruptcy, Chapter 11 and Chapter 12 are the two most common types of in-court restructurings.

In countries where public debt is unsustainable, governments should consider restructuring as an option. Negotiations should include both public and private creditors. The restructuring framework should include incentives to attract private creditors. Multilateral agencies could facilitate these negotiations. If private creditors are reluctant to negotiate, guarantees on new debt issuance may help to bring them to the table. In such cases, a government or private organization can negotiate with them on behalf of the debtor.

The V20 Group, a group of finance ministers from 48 countries representing 1.2bn people, issued a statement on the fair process of debt restructuring. They drew on a proposal for green inclusive recovery to help countries manage their debt. This is a positive step. It can help free up large resources for climate action. In addition, it can help demonstrate credible financial mobilization beyond the $100 billion mark, which is vital to fostering more confidence in developing countries.

Typically, consumers who need debt restructuring will already have a lower credit score. Consumers with high credit card debt or a history of missed payments will often see their FICO(r) scores decrease. If you have missed more than 30 payments in the past, you’re most likely considering a debt restructuring deal. But there are some things you can do to minimize the negative impact of debt restructuring on your credit rating.

A significant aspect of a debt restructuring on a credit score is whether the loan remains on an accrual status. The bank will look at a borrower’s sustained historical repayment behavior, which generally involves payments of cash. Often, debt restructuring is a short-term solution. If it’s not done correctly, the process could lead to the accumulation of additional debt. Thus, it’s essential to choose a solution based on your financial situation, such as re-scheduling your loan tenure and reducing your credit utilisation ratio.

Debt restructuring is a viable alternative to bankruptcy, which can reduce a FICO(r) Score by 150 points. A Chapter 7 or Chapter 13 bankruptcy remains on a credit report for 10 years. But it’s also possible to avoid fees and high interest rates by opting for a debt relief program instead of filing for bankruptcy. Further, a debt restructuring plan may be easier to set up than a bankruptcy filing.