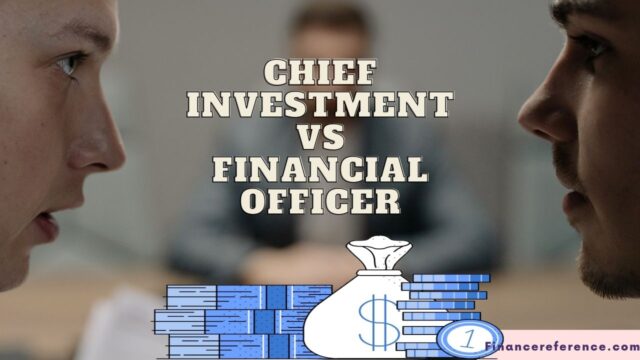 If you are confused about the difference between a chief investment and financial officer, you are not alone. Countless business owners are confused about the duties of each position, and if you are one of them, you’ve come to the right place. In this article, you’ll learn how to distinguish between the two positions, what makes one different from the other, and what the difference between a CIO and CFO is.

Whether you’re looking for a job in corporate finance or investment management, you need to know the differences between the two positions. A chief investment officer is a high-level executive who oversees the organization’s investment portfolios. They formulate short and long-term investment plans and recommend investments. These executives typically oversee a team of employees who monitor the company’s pensions, assets, and allocation.

Chief financial officers are responsible for company finances, while chief investment officers focus more on investments. They may operate in an office setting, but also need to travel a lot. They must meet with shareholders, trustees, and third-party service providers. In some cases, both a CIO and a CFO may perform multiple finance roles, including investment management. The roles overlap in some cases, though. Corporate businesses commonly employ both.

Duties of Each Position

The CIO and CFO have many of the same responsibilities, but they do have some differences as well. While the CFO is heavily involved in accounting and finance, the CIO has broader responsibilities. He or she oversees the company’s investments, budgets, and cash flows. The CIO also oversees the investment process and makes recommendations to the management team. These two positions are often paired with similar salaries and duties.

The primary duties of the chief investment officer include choosing operating funds for investment activities and creating efficient processes. In addition to this, he or she must make investment recommendations to the CEO, who will ultimately be the one who makes the final decisions on how to invest company funds. Chief investment officers typically allocate assets in accordance with risk management models, budgetary limits, and expectations. A CIO may not delegate some investment-related tasks to a CFO.

The Chief Investment Officer oversees the company’s external and internal investments. He or she answers to the board of trustees, but may also have more travel than a CFO. Both positions require frequent meetings with trustees, shareholders, and third-party service providers. In some cases, the CIO and CFO roles may overlap, and a chief investment officer may also serve as the chief financial officer.

The CFO oversees all financial tasks within the company. The CIO may delegate some tasks to his or her assistant. Chief investment officers are executive positions primarily responsible for overseeing the company’s investments. They generally have the power to make investment decisions, but do not manage the money themselves. But the CFO may have the authority to oversee certain investments. There are some differences between the two positions.

Although IT has been viewed as a cost center for a long time, the role of a CIO is rapidly gaining importance in corporate America. Indeed, as the number of Fortune 1000 companies with CIOs increases, so too do the salaries of those in the role. However, while more companies are recognizing the value of a CIO as a strategic partner, the title often remains undefined, despite the fact that many of them earn more than the chief financial officer.

While onboarding new employees is complex, it can also lead to disconnection and defeat. These issues have a negative impact on the individual employee, their team and the organization itself. The CIO has the experience and technical expertise to build secure data integration procedures that give the CFO a complete picture of organizational operations and market trends. By contrast, the CFO is typically interested in maximizing organizational productivity and driving growth.

While the median U.S. household income in 2000 was $42,148, the median CIO’s salary is $54,768. In comparison, CEOs of companies with $5 billion in revenue routinely earn seven-figure packages. The pay disparity between CFOs and CIOs is a leading factor in these differences in pay. So, if CIOs want to become CFOs, there are a few key ways to earn more than the CFO.

The most important way to avoid this problem is to create a baseline of information about what IT is costing the organization. That baseline will help CIOs become trusted advisors to the CFO. By collaborating with the CFO and other stakeholders, CIOs can be seen as an integral part of the organization’s strategy. So, if you’re a CIO, it’s worth getting your MBA.

Many CIOs believe they’re focusing on the latest and greatest tech. But in reality, while CIOs are keeping tabs on hottest technologies, they’re still building the platform that will make digital change possible for their companies. A few of the most notable technologies that CIOs overlook include cloud computing and big data analytics. But most CIOs aren’t using them. They’re still building the foundation and the tools that will make it possible.

While CIOs are often tasked with managing investments, CIOs also oversee the back office and may hire dedicated managers for specific investments. An OCIO’s relationship with a client company extends beyond the investment management process. OCIOs may be assigned to a team of professionals that handle capital calls and auditor valuations. And an effective OCIO stays current on market trends and conducts ongoing research. This research will inform investment policies and strategies.

Despite the challenges of CIOs, it’s possible to build a strong business career. In the new year, they can invest in themselves and build their teams to be business leaders. Otherwise, they risk being relegated to second-tier “care and maintenance” roles where they’re tasked with supporting other people’s goals and strategies. If that happens, they’ll need to aggressively reskill their IT workforce.

A CIO’s reporting to the CEO can make the relationship with the chief executive more fragmented. To foster a more balanced conversation, CIOs can develop relationships with other business executives. By building relationships across the board and with management, CIOs can foster advocates for technology that can help the company grow. They can also engage in ongoing strategic technology discussions with management teams and board subcommittees.

While the reporting structure of a CIO can shape the position within a firm, it should not hinder a CIO’s strategic role. Rather, it should encourage the CIO to be as strategic and influential as possible, regardless of their reporting structure. Non-chief executive CIOs can still be considered critical strategic business partners. They must operate within the context of a more senior executive, however, and must also have the support of the C-suite to ensure that IT’s goals and performance are aligned with the company’s overall strategy.

CIOs face high expectations regarding investments, as they must manage the overall risk of an organization. The challenge for CIOs is to create a balance between risk and return, while still ensuring the fiscal security of the organization. Communication skills are also essential, as they must clearly communicate the strategies to other stakeholders. CIOs should also be able to clearly outline their investment strategies to the board, which is ultimately responsible for their effectiveness.

While the right metrics for reporting IT portfolio performance are dependent on the context and situation in a given organization, they should still be adjusted as necessary. An example of this would be tracking the results of investments and the outcomes they generate. However, it is important to note that CIOs should not focus solely on technology metrics or operational performance metrics, as they bore business leaders and fail to convey the value of IT. Instead, they should focus on metrics that demonstrate business value and establish credibility within the organization.