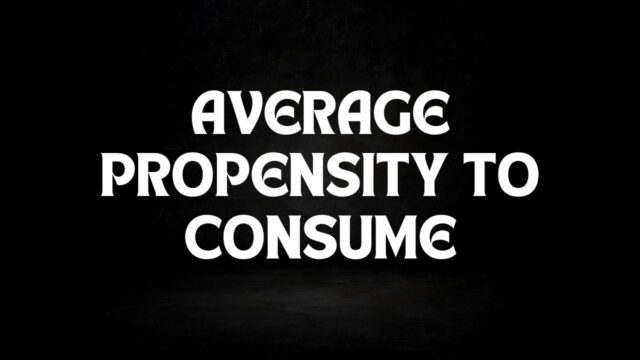 The average propensity to consume (APC) is an economic term that refers to the percentage of income that a household spends on goods and services. In other words, it is the amount of money that a family spends out of every dollar they earn. The APC can be influenced by a variety of factors, including interest rates, inflation, and changes in income. For example, when interest rates are high, families are usually more inclined to save rather than spend.

On the other hand, when inflation is rising, families may increase their spending in order to keep up with the rising costs of goods and services. Changes in income can also impact the APC, as families with lower incomes are typically more likely to spend a larger percentage of their earnings than those with higher incomes. Ultimately, the APC is determined by a number of different factors and can fluctuate over time.

Businesses can use the APC to their advantage by understanding how changes in consumer spending patterns can impact their bottom line. For example, if the APC decreases, it indicates that consumers are saving more and spending less. This can lead to lower sales and revenues for businesses, which may then need to adjust their prices or production levels accordingly. On the other hand, if the APC increases, it means that consumers are spending more and this can lead to higher sales and profits for businesses. Therefore, by monitoring the APC, businesses can get a better sense of how changes in consumer behavior will impact their operations.

The APC is a key indicator of consumer spending patterns and can be used to predict economic growth or recession. A high APC indicates that consumers are spending a large portion of their income on consumption, which can lead to economic growth. However, a high APC can also be a sign of an upcoming recession, as it may indicate that consumers are overspending and borrowing against future income. The APC is just one of many indicators that economists use to predict economic conditions, but it can be a helpful tool in understanding consumer behavior.

There are a number of implications associated with a high or low APC. A high APC can lead to higher levels of debt and inflation, as well as lower levels of saving and investment. This can ultimately lead to an increase in the cost of living and a decline in the standard of living. A low APC, on the other hand, can lead to higher levels of saving and investment, which can help to improve the long-term economic prospects of an individual or household. In addition, a low APC can also help to protect against inflationary pressures. Ultimately, the level of the APC is just one factor that needs to be considered when making decisions about personal consumption expenditure.

What does the future hold for the average propensity to consume?

The future of the average propensity to consume (APC) is difficult to predict. The APC is determined by a variety of factors, including income, savings, and confidence in the economy. In the short-term, the APC is influenced heavily by current economic conditions. For example, during periods of economic growth, consumers are typically more confident and have more disposable income, leading to higher levels of consumption.

However, during periods of recession, consumers may cut back on spending in order to save money or pay down debt. Looking longer-term, it is difficult to say what will happen to the APC. It could rise or fall depending on a number of factors, such as changes in tax policy or interest rates. Ultimately, predicting the future of the APC is a complex task that depends on a wide range of economic conditions.