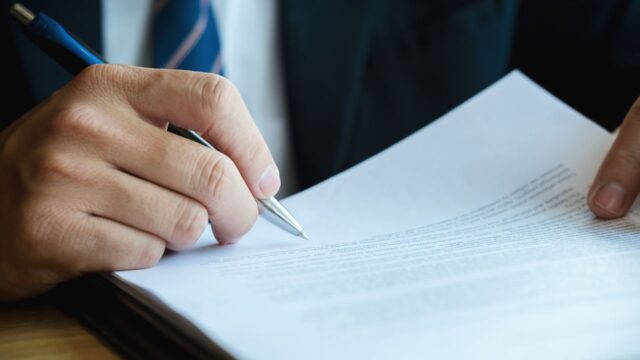 What is an Aleatory Contract

An aleatory contract is a type of agreement in which one or more of the parties agrees to perform an uncertain act, usually in exchange for money. The name “aleatory” comes from the Latin word for “chance,” because the outcome of the contract is contingent on external events that are beyond the control of either party.

Aleatory contracts are often used in insurance and gambling, where they provide a way to transfer risk from one party to another. In insurance, for example, the premium paid by the policyholder is used to offset the losses that may be incurred if an insured event occurs. Similarly, in gambling, the casino uses aleatory contracts to transfer the risk of losing bets to the player. While aleatory contracts can be beneficial to both parties, they can also be very risky, which is why it is important to carefully consider all the terms of an agreement before signing it.

What are the benefits of using an Aleatory Contract

There are some drawbacks to aleatory contracts as well. They can be complex, and it can be difficult to determine what the fair value of the contract should be.

What are the risks of using an Aleatory Contract

While aleatory contracts can provide peace of mind and financial security in the face of uncertainty, they also come with certain risks. First and foremost, there is always the risk that the event upon which the contract is contingent will never occur. This means that the policyholder may have paid premiums for years without ever receiving a payout. In addition, even if the event does occur, there is no guarantee that the insurer will be able to make good on their promise to pay out. Insurers are subject to their own risks and may become insolvent before the policyholder is able to collect. For these reasons, it is important to carefully consider the risks and rewards of entering into an aleatory contract before making any decisions.

When is it appropriate to use an Aleatory Contract

This type of contract is often used in insurance contracts, where the insurer agrees to pay the policyholder a sum of money if a specified event (such as death, disability, or property damage) occurs. Aleatory contracts can also be used in other situations, such as construction contracts. In a construction contract, an aleatory clause might state that the builder will only be paid if the project is completed on time and within budget.

If the builder fails to meet these conditions, they will not be paid. While aleatory contracts can be helpful in some situations, they can also be very risky. Because the event that triggers payment is out of the parties’ control, there is always a chance that the event will not occur and one or more of the parties will not receive what they are owed. As a result, it is important to carefully consider whether an aleatory contract is appropriate for a given situation before entering into one.

How do you create an Aleatory Contract

In order to create an aleatory contract, one must first determine the potential risks involved and then calculate the likelihood of those risks occurring. Once the risks and probabilities have been determined, the insurer can then set premiums and coverage limits accordingly. While aleatory contracts can be useful for both insurers and policyholders, it is important to remember that they are not without their downside; if an event does occur, the policyholder may end up paying more than they would have without the insurance.

What are some things to consider when creating an Aleatory Contract

There are a few things to keep in mind when creating an Aleatory Contract. First, both parties must be in agreement as to the terms of the contract. This includes specifying the amount of money to be exchanged, as well as the conditions under which the money will change hands. It is also important to make sure that both parties understand the risks involved in the contract. For instance, if one party agrees to pay another a certain amount of money if it rains on a particular day, they could end up losing a lot of money if it ends up not raining. As such, it is important to make sure that all parties involved are aware of the risks before entering into an Aleatory Contract.

How can you avoid disputes with an Aleatory Contract

In order to avoid disputes, it is important that both parties clearly understand the terms of the contract and what each is responsible for. The insurer should carefully consider the risks involved and determine whether they are willing to assume them. The insured should also make sure that they are adequately protected against all possible losses. By clearly defining their roles and responsibilities, both parties can help avoid disputes down the road.