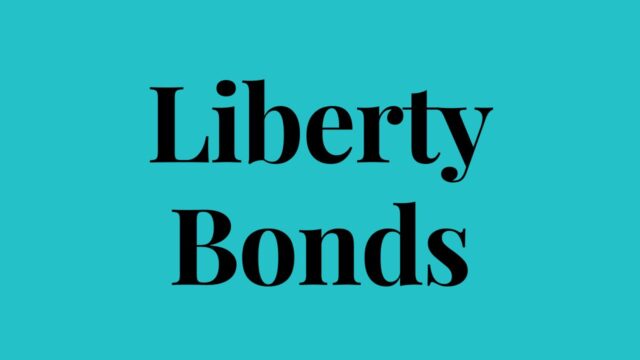 Liberty Bonds were a type of war bond issued by the United States government during World War I. They were used to fund the war effort and were offered to the public as a way to invest in the war and support the troops.

The first Liberty Bonds were issued in 1917, with a series of subsequent bond issuances occurring throughout the duration of the war. These bonds were sold to individuals, businesses, and financial institutions at a fixed rate of interest, with the promise that they would be repaid after a set period of time.

The purpose of Liberty Bonds was twofold: to raise money for the war effort and to encourage Americans to financially support the war. The government believed that the bonds would help to fund the war while also providing a sense of patriotism and national pride among the American people.

How did Liberty Bonds work?

Liberty Bonds were issued in denominations ranging from $50 to $1,000, with varying interest rates and maturity dates. They could be purchased in person at banks or other financial institutions, or through the mail by filling out an order form.

The bonds were initially sold at a discount, meaning that they could be purchased for less than their face value. For example, a bond with a face value of $100 might be sold for $80. The bondholder would then receive the full face value of the bond when it matured, plus the accrued interest.

Liberty Bonds were marketed as a patriotic way to support the war effort, and the government encouraged Americans to buy them through a series of promotional campaigns. These campaigns included posters, advertisements, and public appearances by celebrities and politicians.

What happened to Liberty Bonds after World War I?

After the end of World War I in 1918, the government began to pay off the Liberty Bonds as they matured. Bondholders received their principal and interest payments as promised, and the bonds were retired.

Today, Liberty Bonds are a historic relic of a bygone era, but they remain an important part of America’s financial history. They were a crucial tool in funding the war effort during World War I and helped to rally the American people behind a common cause.