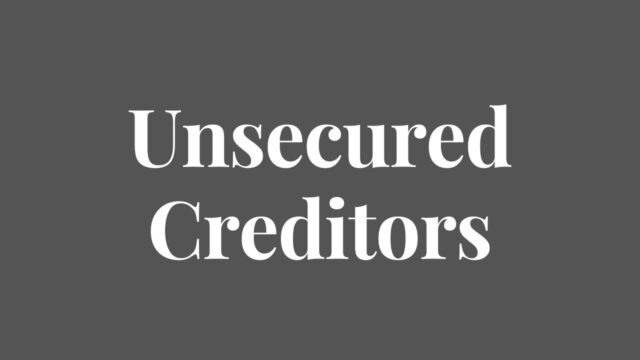 What is an Unsecured Creditor?

An unsecured creditor is a person or entity with whom one has entered into an agreement whereby they provide funds to another person or entity with no promise of repayment, apart from the agreement itself. This means that if the debtor fails to repay the debt, the creditor has no legal right to pursue any form of action in order to recoup their losses. In other words, because there is no collateral associated with the loan, there is nothing for a court to seize as recompense.

Unsecured creditors are typically individuals who extend loans without taking any security against property or other assets owned by the borrower. As such, these types of creditors are often viewed as being more vulnerable than secured creditors because they have little recourse if their debtors fail to repay them on time.

Rights and Responsibilities of Unsecured Creditors

The rights and responsibilities of unsecured creditors depend on various factors such as jurisdiction laws and contractual agreements between parties involved in the transaction. Generally speaking, however, it’s important for parties engaging in unsecured lending agreements to understand that these types of lenders may have fewer rights than secured lenders in terms of recovering their losses should the debtor default on repayment obligations or file for bankruptcy protection.

Additionally, while most jurisdictions allow lenders some degree of legal action against debtors who fail to pay back their loans on time – including wage garnishment – these measures may not be available if the loan was made without any collateral attached.

Furthermore, it’s important for all parties involved in an unsecured loan agreement to fully understand relevant state and federal laws regarding consumer protection and lender-debtor relationships as well as applicable contract law principles related to breach-of-contract claims and remedies available under those circumstances.

How Unsecured Creditors are Affected in Bankruptcy

When a company goes bankrupt, unsecured creditors are often at the bottom of the list when it comes to who gets paid first. This is due to their lack of collateral or security against their debt, which means that they have no legal claim on the company’s assets. As a result, these creditors often do not receive payment for their debts until after other creditors with more secure claims have been satisfied.

It is important to note that there are risks involved with lending money without securing it with some form of collateral or security agreement.

If you choose to lend money without taking steps to protect yourself by securing your loan with collateral or by obtaining a court judgment against the borrower, then you may be left with nothing if the borrower defaults on their loan or declares bankruptcy.

That said, there are certain advantages associated with unsecured loans such as lower interest rates and less paperwork required when compared to secured loans.

In conclusion, it’s important for both lenders and borrowers alike to understand what unsecured creditors are and how they operate before entering into any sort of lending arrangement with one another.

The terms of each individual situation will vary depending on jurisdiction laws and contractual agreements between parties involved in the transaction; however, generally speaking it’s essential for all parties involved in an unsecured lending arrangement to know what their rights and responsibilities entail so everyone can protect themselves from potential financial loss due to nonpayment or other breaches-of-contract. With this knowledge in hand anyone should feel confident about engaging with an unsecured creditor safely!