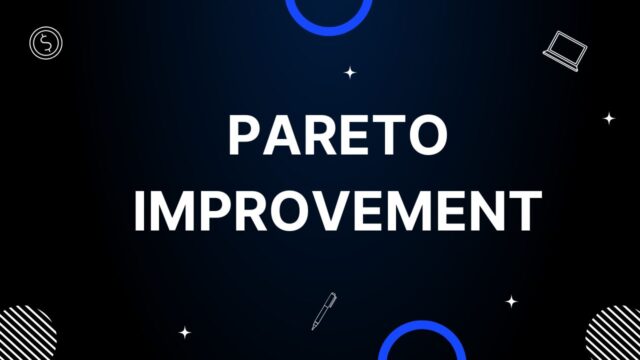 What is Pareto Improvement

Pareto Improvement is defined as a change to a situation which results in one person becoming better off without anyone else becoming worse off. The term was first coined by economist Vilfredo Pareto, who observed that 20% of the population owned 80% of the wealth.

He believed that it was possible to make society more efficient by redistributing resources in a way that benefited the majority of people. Today, the concept of Pareto Improvement is often used in business and politics to describe a situation where both sides gain something from a negotiation or deal. For example, an employer may offer their employees a pay rise in return for them working longer hours.

In this case, both the employer and the employees are better off as a result of the deal. Similarly, two countries may agree to trade with each other in order to boost their respective economies. As long as both sides feel that they have benefited from the arrangement, it can be said to be a Pareto Improvement.

How to achieve Pareto Improvement

Pareto improvement is an economic concept named after economist Vilfredo Pareto, who observed that 80% of the land in Italy was owned by 20% of the population. The Pareto principle can be applied to nearly any situation where there is inequality, and it states that for every situation, there is a way to make things better for the majority without making anyone worse off. In other words, a Pareto improvement occurs when the benefits of a change outweigh the costs. For example, consider a company that employs 100 people. If the company introduces a new product that increases profits by 10%, this would be a Pareto improvement, since it would benefit the company as a whole without harming any individual employees. Achieving Pareto improvements can be difficult, but it is important to strive for them whenever possible, as they can lead to greater overall prosperity.

The benefits of Pareto Improvement

Examples of Pareto Improvement in action

One example of a Pareto Improvement is when two people with different preferred colors swap shirts. In this scenario, both people are better off because they have a shirt of their preferred color. Another example is when a company reduces pollution without reducing production. This Pareto Improvement occurs because the company is able to reduce its environmental impact without reducing its output or profitability.

How to get started with Pareto Improvement

Pareto Improvement is a methodology used to improve processes and systems. It is based on the Pareto Principle, which states that 80% of the effects come from 20% of the causes. Pareto Improvement focuses on eliminating the causes that have the most significant impact, in order to achieve the greatest overall improvement.

The first step in Pareto Improvement is to identify the problem that needs to be addressed. Once the problem has been identified, it is important to gather data about the current process or system. This data can be collected through observations, interviews, or surveys. Once the data has been collected, it is necessary to analyze it in order to identify which factors are having the biggest impact on the problem. Once these factors have been identified, they can be addressed through changes to the process or system. Finally, it is important to monitor the results of these changes to ensure that they are having the desired effect. Pareto Improvement is an iterative process, and each cycle should result in a more efficient and effective process or system.