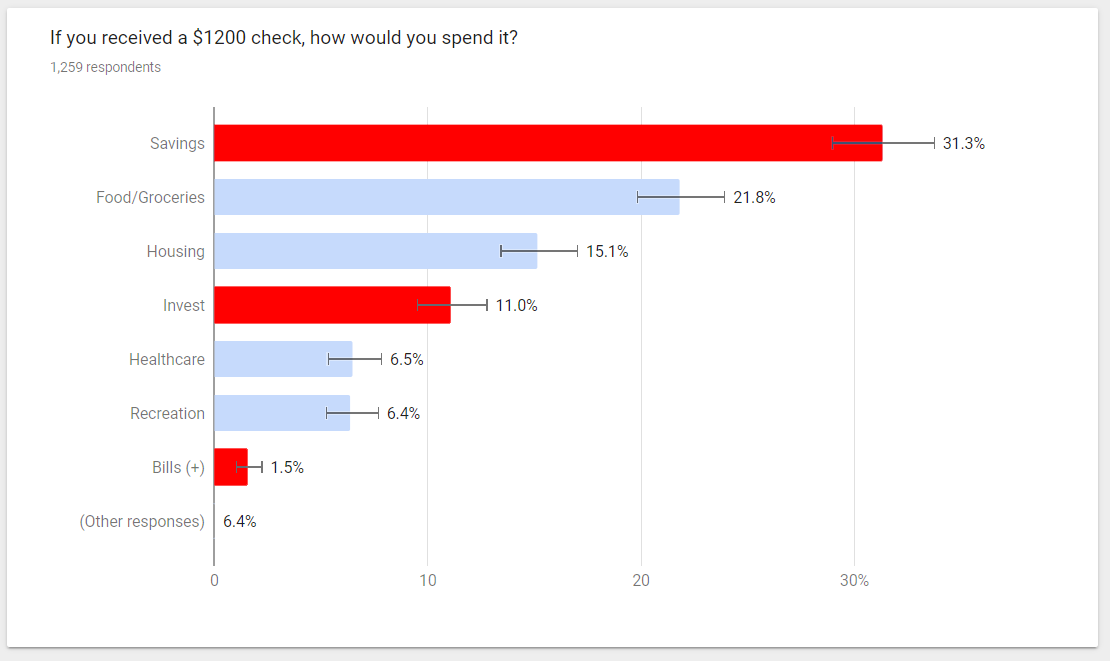 RALEIGH, NC (Finance Reference Data Insights) — A new, nationwide study of United States adults casts doubts on the potential effectiveness of the new stimulus bills considered by Congress and the new administration. When asked how they would spend the stimulus, Americans buy and large said they would sit on the money, so to speak, rather than use it in ways that stimulate the economy.

While direct stimulus in the form of checks sent to adult American citizens has been on the table for Congress since the pandemic began in late January 2020, little research has been conducted that identifies the way in which Americans would spend their stimulus money. The goal of the stimulus would be to provide relief to families during the pandemic but also to spur consumer spending at U.S. businesses. However, latest survey research reveals this is unlikely.

The trend of intending to put stimulus checks directly into savings remains the highest selected option among all demographics considered, either by age, sex, or region excepted for one. Only the general population of adults 55-64 said they would spend slightly more on groceries than savings, although this number is dwarfed by the combinations of savings, investments, and existing bills.

The allure of something as simple as writing checks to the American population (both for political points and simplicity) as a way to stimulate the economy and help families in need seems to all but guarantee that direct payments will ultimately pass Congress. However, the survey reveals a much more complex issue – that some Americans need assistance far more than others and it does not seem to be related directly to any particular demographic.

Upon reflection, this is not to be surprising as the pandemic has struck household to household based on type of employment, extended family responsibilities like caretaking of elders, and pure luck. A blanket solution like direct payments is at best a lazy attempt at reaching these people and, at worse, a failure to efficiently use tax payer dollars to address the pandemic economy.

“Everyone wants the American family back on their feet, but it is abundantly clear this is not the way to accomplish it. The blanket delivery of checks to American adults without consideration of need, especially when there are clear pathways to direct payments towards those in need, is at best lazy and at worst attempted bribery of the American voter,” noted Drew Travers of Finance Reference Data Insights. “If there ever was evidence that the blind redistribution of wealth is inefficient or ineffective, this is it. Targeted assistance for the unemployed, for crippling small businesses, and for the sick and their caregivers is what we need.”