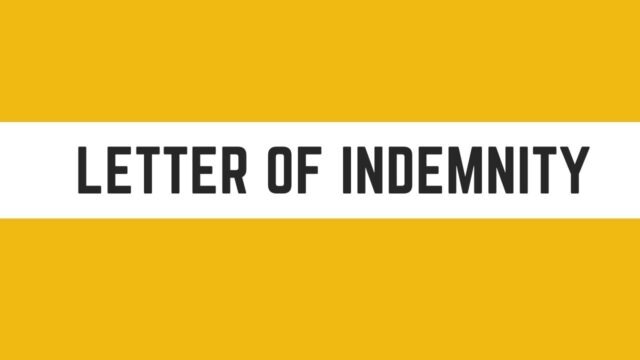 How to Write a Letter of Indemnity

When drafting a Letter of Indemnity, consider the following aspects: Legal basis, Form, Purpose, Clauses, and Jurisdiction. If you are unsure of which provisions of a letter to include in your contract, read our guide to help you decide which ones to include. This article also discusses the importance of including a date for execution and signature. Lastly, make sure to state clearly which jurisdiction applies to your agreement.

A Letter of Indemnity is an important document used in international trade and sometimes in shipping. A Guide to Good Practice on Bills of Lading provided commentary on the various types of letter of indemnity and their reasons for use. It also addressed some of the legal issues related to their use. The purpose of this guide is to assist ship owners, managers, and operators in understanding these contracts. The sections are divided into practical guidance and quick reference in red and orange respectively. The anatomy of the letter of indemnity is in purple and legal notes are highlighted in blue.

It is important to mention the date when the letter was executed. It should also state the governing law. Moreover, it should confirm that both parties have entered into a contract. It should also highlight the acceptance of the conditions of the contract. If there is a conflict in the terms of the contract, the indemnified party should compensate for it. It is essential to have a letter of indemnity that is legally valid.

Indemnity letters are a legal document that holds one party harmless from losses caused by the other. They are used in almost all kinds of business dealings. A letter of indemnity ensures that one party won’t have to pay any money to the other if a delinquent party takes legal action against it. Here are some tips to help you write a successful indemnity letter:

An LOI is used in various types of business transactions. When items of value are transported by a third party, they are generally transported in a leased truck or trailer. A LOI is used to ensure the owner of these valuables will receive the compensation if anything bad happens to them. This document is usually signed just before the goods are presented to the recipient. A letter of indemnity is also a good idea to sign before a bill of lading, a document issued by a carrier acknowledging the receipt of your cargo.

A letter of indemnity (LOI) is a legal document that states that the issuer will pay any damages caused by a breach of contract by a third party. It is important to make the terms of the LOI clear to the recipient, as well as the third party beneficiaries, so that the letter is easily understandable. It should also clearly state who is responsible for any damages caused by the issuer and whether the letter is joint and several. Letters of indemnity should be countersigned by the issuer’s parent or bank. Otherwise, alternative forms may be required.

The requirements for a letter of indemnity are surprisingly similar to the requirements for a contract. In general, the letter must be in writing and signed by the issuer and a third party countersignatory. This will serve as a record of the agreement. It should be clearly stated as to what is being protected, as well as the terms and conditions of the indemnity. Here are some things to remember.

The letter should state when and where it was signed, stating the governing law and its subject. It should also specify the conditions of the contract with the other party. In general, it should be as specific as possible regarding the issuer, the charterer, the recipient, and the date the contract was executed. It should also be signed by both parties. It must be signed before delivery of the cargo. It should contain as much detail as possible about the contract and the circumstances that triggered the indemnification.

You’ve signed a contract for painting an office building and have received a deposit, but now you’re finding out that the paint you need isn’t available. If this happens, the next step is to write a letter of indemnity to the customer. Including this letter is a good way to show the customer that you’re serious about completing the job. But don’t go overboard – there are many alternatives to the letter of indemnity.

If you’re unsure about which alternative is right for your company, consult your P&I club. The letter’s terms should clearly outline the promises that the issuer will make and the parties that will benefit. The P&I club can also provide guidance on who has the authority. As long as the issuer and the recipient clearly benefit, the letter should be considered valid. Otherwise, you’ll end up with an unenforceable indemnity.