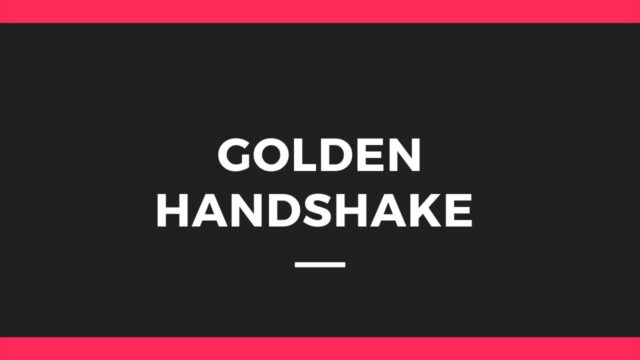 A golden handshake clause is a clause in an executive employment contract that provides a significant severance package if an executive is terminated due to restructuring, scheduled retirement, or other reasons. These agreements are commonplace in corporate America. While there are pros and cons to each arrangement, there are also some key benefits to consider. This article also explores the costs and benefits of these agreements, including what they mean for the reported profits of the company.

The term “golden handshake” refers to a company’s executive employment contract, which typically involves cash, equity, and other benefits. The practice was invented in the mid-1960s by the city editor of the Daily Express, Fredrick Ellis, and has made its way across the world, from Japan to New Zealand. Because high-level executive positions carry a variety of risks, many companies offer hefty golden handshake packages as an incentive for executives to stay. The perks included in such an arrangement are attractive, but they can also be a source of conflict.

The benefits of a golden handshake may seem irresistible. These types of benefits packages are often used to retain and attract top executives. Typically, businesses offer golden handshakes to top-level executives to protect themselves from the financial risk of a layoff. But is there a downside to this strategy? Read on to learn more. Listed below are a few benefits of golden handshakes. Let’s examine each one in turn.

Companies may offer a golden handshake as a way of attracting top employees. Companies may also think that offering a golden handshake is a better way of rewarding loyalty than laying off employees. The benefits package is generous, and it is often difficult to monitor whether employees are being productive and maximizing their benefits. However, this compensation package may be a sign of coercion on the part of the employee. These benefits packages can be costly for the company.

The impact of a golden handshake on a company’s reported profits is unknown. The practice of awarding large payoffs to executives is not only controversial, but also harmful to the company’s image. Large payoffs are perceived by some investors as a reward for failure, and one recent example is the oil spill at the Deepwater Horizon oil rig in 2010.

Many companies award top-level employees with a golden handshake. This tradition originated in the 1960s. This compensation often ranges from a few hundred dollars to several million dollars. For example, a long-serving factory worker might be rewarded with a week or month’s salary for each year they work. But top executives may receive hundreds of millions of dollars. For example, Frederick Ross Johnson received $53 million when he left RJR Nabisco in 1989. In 2006, William McGuire received $1.6 billion in stock for growing UnitedHealth Group Inc. from $400 million to 70 billion in revenue in fifteen years.

A golden handshake non-compete agreement is an effective tool for luring top executives to a new company. However, this type of contract has its pitfalls. Not only does it encourage early retirement for the executive, but it also creates perverse incentives. As a result, it may end up hurting the company’s reputation. In addition, golden handshake agreements may encourage an executive to take shortcuts and cut corners in order to leave the company for a higher position.

In marketing, the terms “Golden handshake” and “perverse incentives” refer to two different concepts. First, perverse incentives refer to incentives that have negative consequences for a business and the community at large. Some people use the term to refer to moral hazard, in which unanticipated incentives lead to detrimental effects on a group or community. Both concepts are common in business and English communication. However, the exact meaning of each one depends on the context.