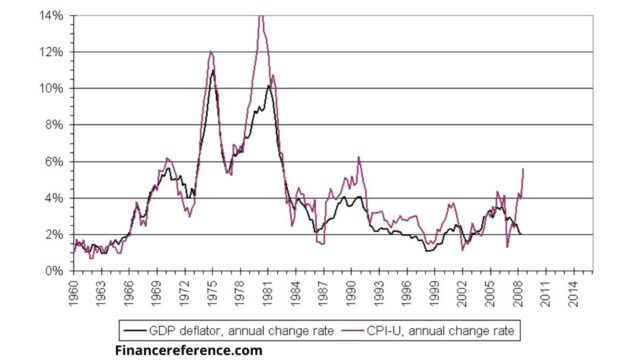 When it comes to measuring the rate of inflation, there are two main methods that are used: the GDP Deflator and the CPI. But what are these measures, and which one is more accurate? In this post, we’ll take a closer look at each one and discuss their pros and cons.

What is the GDP Deflator

What is the CPI

The Consumer Price Index (CPI) is a broad measure of inflation within an economy. It is calculated by measuring the change in prices of a basket of goods and services that are typically purchased by households. The CPI basket includes items such as food, housing, transportation, and medical care. The CPI is used by governments and central banks to make economic decisions, such as setting interest rates. Higher inflation results in higher prices for goods and services, which can lead to a decrease in purchasing power for consumers. The CPI is one way to measure inflation and its effects on the economy.

How are they different

Which one should you use to measure inflation

This can be done by looking at price indexes for specific items, such as the housing index or the food and beverage index. There are many different ways to measure inflation, and each has its own advantages and disadvantages. GDP deflators are generally considered to be a more accurate measure of inflation, while CPIs are more commonly used to measure the cost of living. Price indexes can be useful for measuring specific sectors of the economy, but they may not be representative of the entire economy.

How do they impact your everyday life

When economists compare GDP from one year to GDP from another, they adjust for inflation by using a GDP deflator. The GDP deflator isn’t the same as the CPI, which is what most people think of when they think of inflation. The CPI tracks the cost of a basket of goods and services that are representative of what consumers purchase. The GDP deflator, on the other hand, measures the prices of all final goods and services produced within the economy. Because the GDP deflator covers a broader range of items than the CPI, it is usually higher than the CPI.

So why does this matter? Well, if you’re comparing GDP growth rates from one year to another, you need to use the GDP deflator to get an accurate measure of growth. For example, let’s say that in 2020, nominal GDP was $20 trillion and in 2019 it was $19 trillion. Using the GDP deflator, we can see that real GDP actually grew by 2.6%, not 4.2%. This is because some of the nominal GDP growth was due to inflation rather than actual increases in output.

Which one is more accurate

There are two main measures of inflation in the economy: the GDP deflator and the CPI. Both measures attempt to track the changes in prices of a basket of goods and services over time. However, there are some important differences between the two measures.

The GDP deflator is a measure of the overall price level of all goods and services produced within an economy. It is calculated by dividing nominal GDP by real GDP and then multiplying by 100. The CPI, on the other hand, is a measure of the prices of a basket of consumer goods and services. It is calculated by taking a weighted average of the prices of different items in the basket.

Overall, both measures have their advantages and disadvantages. Which one you consider to be more accurate depends on your specific needs.