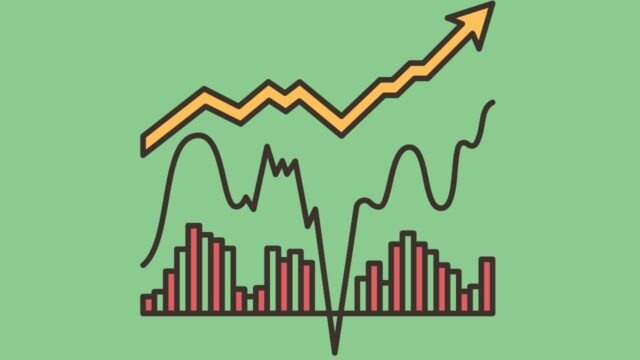 How are they different?

EMA12 and EMA26 are two moving averages that are used by traders to help identify trend direction. EMA12 is the 12-period Exponential Moving Average, while EMA26 is the 26-period Exponential Moving Average. EMA12 is considered a short-term moving average, while EMA26 is considered a long-term moving average. EMA12 is more sensitive to price changes than EMA26, which means it can generate signals more quickly. However, this also means that EMA12 is more prone to false signals. EMA26 is slower to react to price changes, but its signals are typically more accurate. As a result, EMA12 and EMA26 can be used together to provide a more complete picture of the market.

What is exponential moving average

The exponential moving average, or EMA, is a technical indicator commonly used in stock market analysis. It attempts to smooth out price fluctuations by giving more weight to recent data and less weight to older data.

Moving averages are one of the most commonly used technical indicators in the forex market. There are two types of moving averages that are widely used by traders: the simple moving average (SMA) and the exponential moving average (EMA). both have their own pros and cons, so it’s important to understand the difference between them before using them in your trading strategy.

The simple moving average is the most basic type of moving average. It is calculated by taking the sum of all past prices over a certain period of time and divided by the number of periods. The main advantage of using an SMA is that it is easy to calculate and interpret. However, because it only uses past prices, it is inherently lagging and may not provide timely signals.

The exponential moving average is more complex than the simple moving average as it gives more weight to recent prices. This makes it more responsive to changes in price direction, but it can also make it more volatile. Many traders use a combination of both SMAs and EMAs in their trading strategies to get the best of both worlds.

How do you decide which one to choose?

When it comes to moving averages, there are a number of different options to choose from. EMA12 and EMA26 are two of the most popular choices. So, how do you decide which one to use?

There is no simple answer, as it will depend on your individual trading strategy and goals. However, here are a few things to keep in mind when making your decision. EMA12 is a shorter-term moving average, which means it is more sensitive to changes in price. This can be both good and bad, as it can give you an early warning of a trend change but can also result in false signals. EMA26 is a longer-term moving average, so it is less responsive to price fluctuations. This can make it more reliable in identifying trends but can also mean you miss out on early moves. Ultimately, it is up to you to experiment and trading strategy with both EMA12 and EMA26 and see which one works best for your needs.

What if you can’t decide?

So, which one should you use? Ultimately, it depends on your trading style and what kind of information you’re looking for. If you’re trying to identify short-term trends, then the exponential moving average 12 may be a better choice. However, if you’re looking for longer-term trends, then the EMA26 may be a better option. Ultimately, it’s up to you to decide which moving average is best suited for your needs.