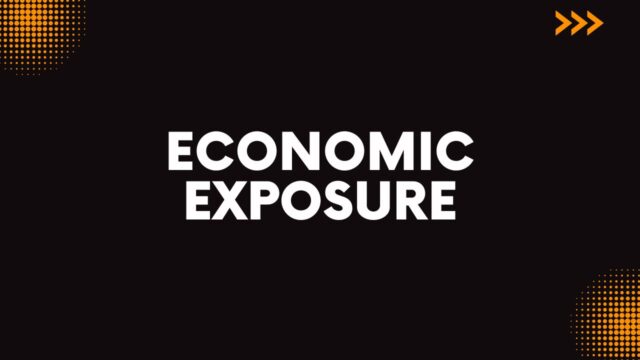 What is ‘Economic Exposure’

A type of foreign exchange exposure caused by the effect of unexpected currency fluctuations on a company’s future cash flows. Also known as operating exposure, economic exposure can have a substantial impact on a company’s market value, since it has far-reaching effects and is long-term in nature.

For example, assume that a large U.S. company that gets about 50% of its revenues from overseas markets has factored in a gradual decline of the U.S. dollar against major global currencies – say 2% per annum – into its operating forecasts for the next few years. If the U.S. dollar appreciates instead of declining gradually in the years ahead, this would represent economic exposure for the company. The dollar’s strength means that the 50% of revenues and cash flows the company receives from overseas will be lower when converted back into dollars, which will have a negative effect on its profitability and valuation.

Two important components of economic exposure to currency changes are asset exposure and operating cash flow exposure. Asset exposure measures the sensitivity of a firm’s dollar value to changes in the value of assets abroad. This exposure is a function of the regression coefficient b, and a British firm with American assets would have different unit prices. The value of assets varies with exchange rates, and a change in currency value will affect a firm’s profitability.

The term “economic exposure” refers to a concern about the present value of future operating cash flows when the firm’s parent currency changes. This concern is most often based on operating cash flows in a foreign country, but can also be applied to home territory operations. The following examples illustrate the impact of various exchange rate scenarios on a firm’s cash flow. For example, consider an Indonesian company that derives 60% of its revenue from the United States market. During the last year, management expects that the rupiah will depreciate by 1.5% annually, resulting in lower sales for the company in Belgium.

Another common way to mitigate economic exposure is to diversify your business. If your business relies on imports and exports from other countries, you can leverage your operations and access a range of international markets. For example, if your company relies on foreign currency to manufacture its products, it might choose to borrow in US dollars, making it less costly for the company to meet the high demand for its goods. The same principle applies to financing a business abroad.

A firm’s economic exposure reflects the extent to which it is exposed to changes in currency exchange rates. The value of a firm’s assets and operating cash flows will change when exchange rates rise or fall. In one example, an Indonesian company earns 60% of its revenue in the US market. Its management assumes that the rupiah will gradually depreciate against the US dollar. This simple hedging strategy breaks down if there is competition in the US market.

Companies with large economic exposure are at a disadvantage in terms of competitiveness. Firms with global operations are more exposed to economic exposure than domestic companies, as most multinational transactions involve several currencies. In addition, companies that have products and services that are competitive with foreign manufacturers face higher competition. Fortunately, companies can mitigate economic exposure by implementing operational risk mitigation strategies, currency risk mitigation, and diversifying their production facilities and financing sources. They can also diversify their market sources to generate sales in different currencies, which can offset the effect of changes in currency exchange rates.

Economic exposure is the risk of a company’s financial value fluctuating as a result of changes in exchange rates. The strength of the local currency can have a negative impact on a firm’s sales prospects in a foreign market. Even if such changes were anticipated, the value of a firm would be discounted before they occurred. Economic exposure is the sensitivity of a firm’s assets and liabilities to future changes in exchange rates. It also affects the sensitivity of operating cash flow.

One example of how economic exposure affects a company’s competitive position is the case of Earthworm Tractors, a U.S.-based manufacturer of heavy construction equipment. Prices for Earthworm Tractors vary substantially across countries due to high shipping costs. The company faces major competitors in Japan and Germany. This is because the exchange rate affects the prices of basic goods and services around the world. In addition, the differences between competitors introduce operating exposure.