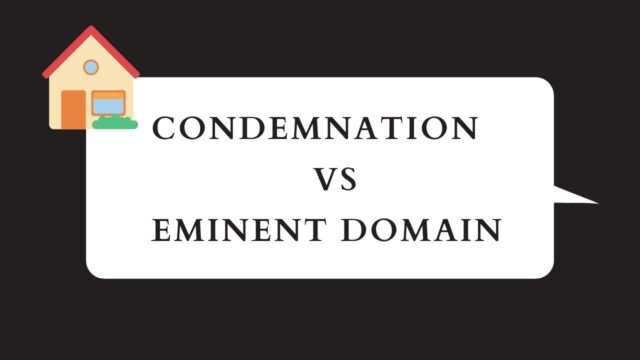 If you’re deciding between condemnation and eminent domain, you should carefully consider what justification the government must give you to take your property. It must be for a legitimate public use. For example, if the land is used for highway improvements or improving road conditions, the government can’t stockpile the land for future use. If the government takes your land for another use, it must use it within five years.

While both eminent domain and condemnation of property are legal, a landowner’s rights are protected by the Constitution. Under the just compensation doctrine, the government must make an effort to reach a settlement with the landowner to ensure that the landowner will receive “just compensation” for their property. After establishing a just compensation amount, the condemnor must provide a written appraisal and summary of its findings. In many cases, a landowner’s right to a list of neighboring properties will prevent the condemnor from using his or her property for the public good.

The condemnor may argue that it cannot award damages for lost income or for lost property value. However, the value of a business is based on the real estate and income it produces. Whether a shopping center or office building is a more valuable asset depends largely on rents and the ability to grandfather environmental requirements. Either way, a taking may drastically affect the real estate’s income producing capacity.

While just compensation is an important factor, eminent domain litigation often involves a series of procedural and substantive defenses. The key to determining whether the condemnation of a property is legal is to examine the necessity, public purpose, and value of just compensation. In Florida, an example of a just compensation case is Seaboard All-Florida Ry. v. Leavitt, 105 Fla. 600 (1932), which dealt with the case of a mortgagee bank.

Despite just compensation, a landowner should evaluate his or her opposition to taking the property. The owner may be hesitant to hand over their land, even if it means he or she will receive a fair price for it. However, depending on the real estate market, the landowner may still be reluctant to relinquish their property. The just compensation he or she receives may not be enough to compensate the owner for the loss of use.

Before pursuing an eminent domain lawsuit, the government must take certain steps. They must give the property owner a proper notice of the taking and a written offer of compensation. In addition, the government must give the landowner a chance to negotiate compensation. It is important to seek professional legal advice before pursuing eminent domain litigation. A skilled attorney can help you navigate these complex issues and ensure that you receive just compensation for your property.

Historically, eminent domain has been used by governments to acquire private land for public uses. However, in 1954, the Berman case broadened the definition of “public use” by giving local governments the authority to condemn “blighted areas.” This decision opened the door for urban renewal projects in the 1960s and 1970s. In other words, a public use of eminent domain must benefit the general public.

In some instances, property owners may be able to challenge the decision to condemn their property. If a condemnation decision goes against their interests, aggrieved landowners have 30 days to raise an appeal. Petitions for appeal must be filed in the appellate division of the supreme court of the county in which the property is located. They must also be limited to issues raised during the hearing. Furthermore, their appeals must be limited to issues raised at the hearing, limiting them to public use.

The Kelo case, in which small businesses near an airport were condemned, has triggered intense discussion about this question. Amici curiae briefs were filed in the case, including 25 by petitioners and five by nonprofit groups. The court’s opinion in Kelo has paved the way for future cases. Even so, eminent domain continues to be a legitimate tool for taking property.

Often, the process of condemnation will include warning signs for property owners. Typically, public hearings take place at the beginning of the process to inform affected property owners. However, the government will only use eminent domain after all the planning for the project is complete. This means that property owners will have ample time to make their voices heard. Therefore, it is important to have a knowledgeable attorney represent you.

In addition to taking private property, the government may use condemnation to obtain land for a public use. For example, a public project may require a large amount of private property for its completion. But it does not necessarily have to benefit the general public in order to qualify. It may also be used by private entities that do not have a public purpose but want to use the land for its own benefit.