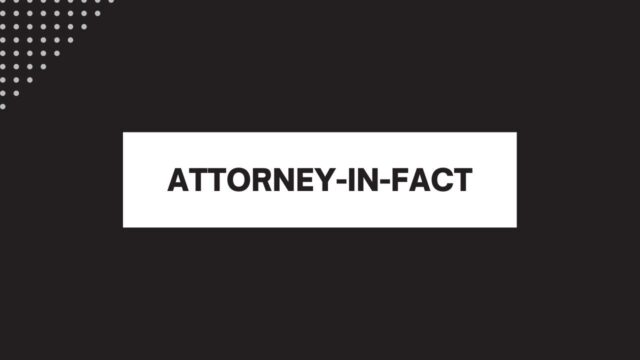 What is an Attorney-In-Fact

In the legal world, an attorney-in-fact is someone who has been appointed to act on another person’s behalf. This can be done through a legal document known as a power of attorney. The person granting the power of attorney is known as the “principal,” while the attorney-in-fact is referred to as the “agent.” The agent will have the authority to make decisions and take actions on behalf of the principal. This can include financial decisions, legal matters, and other personal matters.

What are the duties of an Attorney-In-Fact

The duties of an Attorney-In-Fact can vary depending on the situation, but they typically involve handling financial matters on behalf of the person they are representing. This can include opening and maintaining bank accounts, paying bills, investing money, and filing taxes. In some cases, the Attorney-In-Fact may also have the authority to make medical decisions on behalf of the person they are representing. It is important to note that the Attorney-In-Fact is not a legal guardian, and they do not have the same powers as a court-appointed guardian.

What happens if the Principal dies or becomes incapacitated

Can the Attorney-In-Fact sell the property of the Principal

What are the limitations of an Attorney-In-Fact

How long does an Attorney-In-Fact have power

An Attorney-In-Fact is a person who is designated in an official capacity to act on another person’s behalf. This person typically has a wide range of powers, including the authority to sign legal documents and make financial decisions. The Attorney-In-Fact can be designated in a variety of ways, including through a Durable Power of Attorney or a Healthcare Proxy. The Attorney-In-Fact’s powers generally last until the individual revokes the designation or dies. As a result, it is important to choose someone who you trust implicitly and who you are confident will act in your best interests.