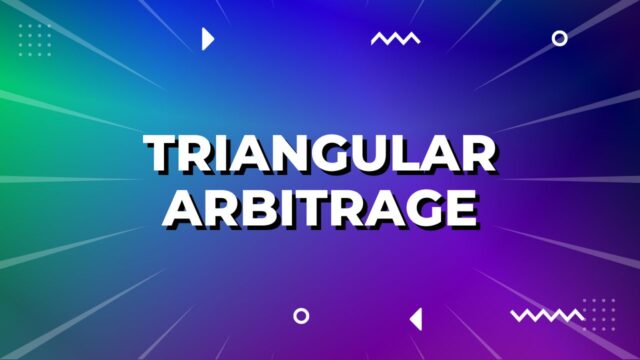 Triangular Arbitrage is a form of arbitrage that exploits pricing discrepancies resulting from the trading of three different currencies in the foreign exchange market. In order to be successful, one must first know the factors that make triangular arbitrage profitable. These factors include market inefficiency, time lag between transaction processing, costs, and profitability. In this article, we’ll go over some of the most important aspects of this trading strategy.

Traders looking for profitable opportunities in the foreign exchange market can take advantage of the inefficiencies in three or more markets. By taking advantage of price discrepancies in multiple markets, traders can achieve a risk-free profit. As the foreign exchange market is highly competitive, these opportunities rarely last for long. High-frequency traders take advantage of these opportunities by exploiting price discrepancies across multiple markets at once. These traders employ high-speed algorithms that are able to detect mispricing and implement necessary transactions immediately. The strong presence of high-frequency traders has helped make the forex market more efficient.

A recent study found that market participants profit from triangular arbitrage across forex and cryptocurrency markets during the coronavirus disease 2019 crisis. This profitable triangular arbitrage occurred due to the strong memory of high returns, low risk, and shock response to global QME policy. To make the most of this profitable arbitrage, regulatory authorities need to develop mechanisms for cross-border coordination. If these regulations are not established, investors will miss out on the benefits of triangular arbitrage.

Traders need to have analytical skills and mathematical calculation skills to perform a successful triangular arbitrage. With the advent of automated trading platforms, traders can now specify rules and let the software execute trades. Automated triangular arbitrage can work with full potential, enabling traders to evaluate historical data and evaluate opportunities. However, traders should bear in mind that the market is fundamentally a self-correcting system. A good arbitrage opportunity may appear a moment later and disappear just as fast.

In triangular arbitrage, currency pairs are bought and sold at the same time. The aim is to take advantage of inconsistencies between the currencies’ exchange rates. For example, when converting the rupiah to US dollars, a trading opportunity may arise if the cross rates are not the same. Similarly, when converting a US dollar to Euros, the transaction must be processed within a short time frame, and this time lag will decrease your chances of winning in this type of trade.

Profitability of triangular arbitrage can be achieved by profiting from the mispricing of two different currencies. For example, if you buy one million dollars for euros and then trade it for pounds, you will end up with a profit of $1373. This is because your costs will be the same in both currencies, as you will be paying the same price for both transactions. However, you must bear in mind that these calculations are only approximate because there are many variables that determine the profits and losses.

One of the most attractive features of triangular arbitrage is its ease of execution. You only need to make two purchases or sell one, but at the same time, you can place orders for the other. The best part about triangular arbitrage is that it is a low-risk trading opportunity. There are several steps involved in the process, but you’ll be able to profit from it. The most important step is to determine how much you’ll earn.

When trading currencies, one common strategy is to lock an arbitrage opportunity. In this way, he can make a profit even if he loses his first trade. The key to triangular arbitrage is identifying a flaw in the market and then leveraging that to your advantage. When it comes to Forex trading, this strategy is most effective when it works in conjunction with a system that automatically equalizes cross rates.

A common example of a triangular arbitrage is when you’re able to make a profit on three different currencies by simultaneously buying and selling each currency. It is an excellent strategy when exchange rates are not identical. This type of arbitrage is possible in any currency combination, even if there are three currencies that are traded. While the profits can be large, the costs are minimal compared to the risk involved. Therefore, triangular arbitrage is an excellent strategy for those who want to make a profit on the market without incurring too much in transaction costs.

Currency pairs in the triangular relation

In order to exploit this opportunity, traders should first identify the currencies that are in a triangular relationship. A common example would be the EUR/JPY pair. This pair is the most volatile in the world and has the largest range. A triangular relation of currencies is highly relevant when there are significant events in the Forex market. This can create an arbitrage opportunity in which traders can profit from a temporal discrepancy between two currencies.

Scaling of fluctuation functions for the case of triangular arbitrage

The scaled variation of a fluctuation function is the result of a particular event’s occurrence. In the example, a trader from the Deutsche Bank sells $5,000,000 of Swiss francs for euros. The Swiss francs would then trade for EUR3,774,969 at UBS and the same with the GBP. On the other hand, a trader from the Dresdner Bank would sell for USD4,949,481 and lose $50,519. To maximize your chance of success, it is important to scale the fluctuation functions of each currency pair.