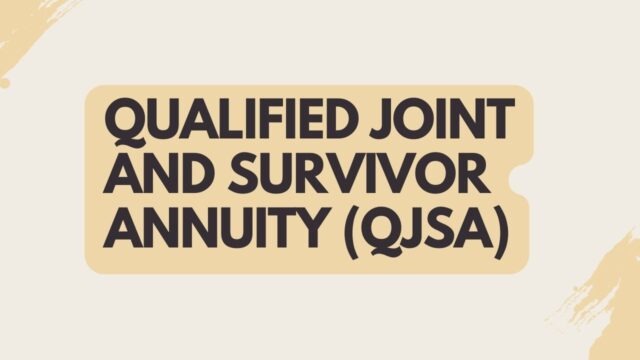 What is ‘Qualified Joint And Survivor Annuity – QJSA’

An annuity payment from a qualified plan or 403(b) account that provides a life annuity to the participant and a survivor annuity for the spouse after the participant’s death. QJSA rules apply to money-purchase pension plans, defined-benefit plans and target benefits. They can also apply to profit-sharing and 401(k) plans, but only if so elected under the plan.

Why would someone choose a QJSA over other retirement plans options available to them, such as a Single Life Annuity or a Period Certain Annuity?”

There are a number of reasons why someone might choose a Qualified Joint and Survivor Annuity (QJSA) over other retirement plan options. One key advantage of a QJSA is that it provides a measure of financial security in the event that one spouse dies. With a Single Life Annuity, the payments stop when the annuitant dies, which could leave the surviving spouse in a difficult financial situation. A QJSA, on the other hand, continues to make payments as long as either spouse is alive, ensuring that both spouses will have an income in retirement.

Another reason to choose a QJSA is that it offers greater flexibility than some other types of annuities. For example, with a Single Life Annuity, the annuitant generally cannot change the payment schedule or beneficiary designation once the annuity has been established. With a QJSA, however, the annuitant can generally make these changes at any time, giving them more control over their retirement finances.

What are some of the key features of a QJSA?

A QJSA is a Qualified Joint and Survivor Annuity. A key feature of this type of annuity is that it guarantees payments for the lifetime of both spouses, even if one spouse dies. Because of this feature, a QJSA is often used as part of retirement planning, as it can provide a measure of financial security for couples in retirement. Other key features of a QJSA include the ability to elect a lump sum payment option, which can provide liquidity in the event of an unexpected need for cash, and the ability to name a beneficiary, which can help to ensure that assets are distributed according to your wishes. Overall, a QJSA can be an important tool in retirement planning, providing peace of mind and financial security for couples.

Are there any drawbacks to choosing a QJSA?

A QJSA is often chosen as a retirement benefit option because it provides a measure of financial security for both the retiree and the survivor. However, there are some potential drawbacks to choosing a QJSA. First, if the retiree dies before reaching normal retirement age, the survivor will receive benefits for a shorter period of time than if the retiree had chosen a different type of annuity. Second, if the survivor predeceases the retiree, the benefits will cease at the time of the survivor’s death, even if the retiree is still living. Finally, if interest rates decline during the term of the annuity, the total amount of benefits paid over the course of both lifetimes may be less than would have been paid under a different type of annuity. Despite these potential drawbacks, a QJSA can still be a good choice for many retirees and their survivors.

What is a qualified joint and survivor annuity?

What is a 50 percent joint and survivor annuity?

What does spousal waiver mean?

A Member’s spouse uses the Spousal Waiver Form to waive his/her legal right to pension benefits after the Member’s death. If the Member would like to select a form of pension that doesn’t provide income to his spouse after the Member dies, then the form must be completed before the Member’s retirement.

What does Qjsa mean?

It stands for Qualified Joint and Survivor Annuity.

How does a joint life annuity work?

A joint-life annuity provides you with an income for life, but then transfers to your spouse, partner or any other chosen beneficiary upon your death, paying them regularly for the rest of their lives. It could , for example, be 100%, two-thirds or half of your retirement income at the time of your death.

What’s the difference between a single life annuity and a joint and survivor annuity?

How is an annuity divided in a divorce?

Options when dividing an annuity: You can withdraw all or part of it; you can have it transferred into an IRA; you can withdraw from the original contract and have new contracts issued to you and your divorcing spouse.