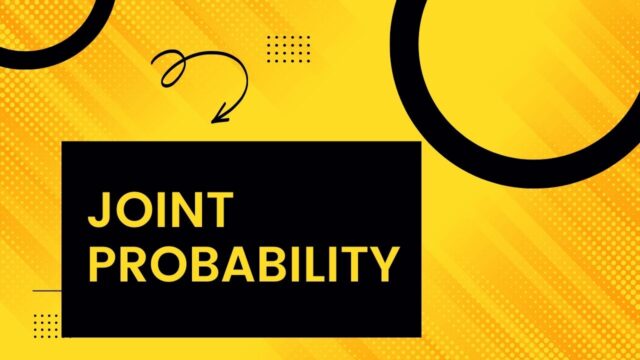 What is joint probability

Joint probability is a statistical concept that refers to the likelihood of two events occurring together. For example, the joint probability of rolling a 6 on a die and flipping a coin landing on heads is 1/12. This is because there are a total of 12 possible outcomes (6 x 2), and only one of them is Rolling a 6 and Flipping a Coin Landing on Heads. Joint probability can be calculated by taking the product of the individual probabilities of each event occurring.

In the example above, the probability of Rolling a 6 is 1/6, and the probability of Flipping a Coin Landing on Heads is 1/2. So, the joint probability is 1/6 x 1/2 = 1/12. While joint probability can be used to calculate the likelihood of any two events occurring together, it is most commonly used in statistical models that involve multiple variables. These models can be used to predict things like the likelihood of two people with a certain genetic disposition developing a certain disease.

How to calculate joint probability

Examples of how to use joint probability

There are many ways to use joint probability, and the applications are really only limited by your imagination. Here are just a few examples:

These are just a few examples of how joint probability can be used. As you can see, it is a very versatile tool that can be applied in a wide variety of situations.

Pitfalls to avoid when working with joint probabilities

First, it can be helpful to draw a diagram of the situation. This can make it easier to visualize the different events and how they are related.

Finally, it is simply a matter of solving the equation and interpreting the results. With a little practice, solving problems involving joint probabilities can become quite straightforward.